Manuel Cameron: Every volunteer is a victory 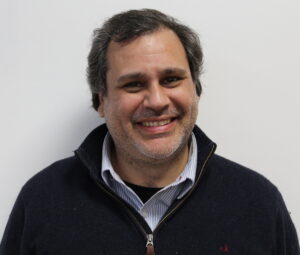 “What brought me to Repowering London? it’s a crazy story,” says Manuel Cameron, Repowering London’s Community Champion for Aldgate Solar Power – a new energy co-operative that has just installed a 36kWp array on the Middlesex Street Estate in the City of London. “I worked in sales for nearly 14 years in Chile for two multinational companies, and I was quite happy there,” he begins. Then, he explains, a change of direction for one of the companies led to an about-face of his own.

That next chapter of his story started when the company he was working with moved its entire corporate strategy towards sustainability. This change of focus had a huge impact on Manuel: “It made me think about leaving my comfort zone and trying something different. I wanted to make a contribution towards sustainability and influence people and organisations to take more pro-environmental action. It pulled the trigger in that respect.”

When that company later decided to wind up operations in Chile, Manuel acted on this thinking. “I knew that I had learned a lot about sustainability in my role by leading projects related to reducing the carbon footprint and the use of plastic by the sales area, but had the ambition to further understand the causes and ways to address the environmental and social crisis from a broader perspective.”

He decided to head for London and study for a master’s degree in environmental development at the London School of Economics. “It was a challenge, in terms of operating in a new language and in terms of studying again after many, many years,” he says. “But it was in line with what I wanted to do, which was to change my career path from sales to a role in which I could lead the behavioural change needed towards a more environmental and socially inclusive future.”

It’s about then that things started to get a little “crazy”. Manuel’s initial plan was to stay in London and study full-time for one year, then go back to Chile in 2020. A few things got in the way. Three weeks before he was due to fly he got COVID-19 and his health wasn’t good enough to travel. It was nasty bout, and not his only one, from which recovery was slow. Then, a week before a second flight was booked in March of 2021, the borders of Chile were shut.

Manuel was able to extend his UK stay and set about finding work in London that made sense with his studies. He was employed by Jump UK to implement a food waste recycling programme in the Borough of Westminster. Then one day he came across an advertised Repowering London role as part-time Community Champion for Aldgate Solar Power (ASP): “It made total sense to me because solar panels tackle climate change and also because getting communities involved is the perfect pathway to towards a sustainable world.”

Though the overall circumstances weren’t ideal, including being forcibly separated from his family and friends back in Chile, “One thing led to another,” he reflects. “If it wasn’t for that I wouldn’t be here and I’m super happy. So, yes, it was tough, but everything happens for a reason.”

Once in post at Repowering London, Manuel was able to watch the first ASP panels get installed in April, largely funded by grants from the City of London and the Mayor of London. He hosted his first ASP event in May, launching the co-op with a screening of ‘We The Power’, a film that showcases the benefits of community energy. “The film set the tone for the rest of the of the meeting and people were really involved with what we were trying to communicate.”

“The lifespan of this project is 20 years and I’m not going be here in 20 years. But I want the group to be here!'”

He’s now leading the launch of a community share offer, which will raise the remaining £11k needed to square the costs for the project so far. For Manuel, it’s his first share launch, so he’s “not sure what to expect”. But he can see the solar panels are already beginning to pay off: “They are producing green energy and the people living there see them every day, so they know that something is going on.”

The visible progress has already helped ASP to recruit new directors and volunteers, but many more recruits are needed to create a strong, effective community group. Manuel will be using all the tools available on and offline to persuade people to join in.

What will he be telling people? “Well, first of all, about the need to tackle climate change and how the energy market is not in line with the climate crisis. I try to link that with the contribution that each person as a volunteer can make, and how by working on a project like ASP they are each making many more people aware that the energy transition is necessary to reduce CO2 emissions. Importantly, I want them to know that they can play a role in ensuring that transition is done in a way that leaves no-one behind or worse off.”

His goal: “I want to consolidate a strong group of volunteers and directors working together. I want to create the circumstances, the atmosphere, where they can take things forward on their own initiative – to make them passionate about ASP. I want them to see that what is going on at the Middlesex Street Estate is just the first step for ASP and to work together with a vision of making ASP grow. The thing is, the lifespan of this is 20 years and I’m not going be here in 20 years. But I want the group to be here!”

Manuel is confident that he will be able to uncover the people that ASP needs. Even if it is by convincing one person at a time. As he points out, every one person leads to more.  In his eyes: “Every volunteer is a victory. Some people may say ‘one person doesn’t make any difference’ – but they do. When you go from zero to one, it’s a difference – from one to two, two to three, three to five, and then five to seven …  this is just the beginning of the story.”

Learn more about Aldgate Solar Power and how you can help bring solar to the City of London here or email Manuel to ways to get involved as a volunteer.